I was an introverted and weird teenager. Writing bad, angst-fueled poetry and smelling of incense.

I made questionable fashion choices that involved colourful tasselled skirts and hiding in massive unflattering jumpers.

For years, I was part-time self-employed. In fact, I was always encouraged to be entrepreneurial by my parents.

My first ‘business’ was a lucrative side hustle babysitting for the teacher’s kids. Maybe the poetry and folk music made me more trustworthy than the average 16-year-old girl in Wellington, Somerset? It was my USP!

My first ‘official’ business was years later: Tom Cat Designs (Hence my Twitter handle and email address!). When I do embark on random acts of creativity I still do it in the guise of Tom Cat Designs.

Like so many young people, as a teenager, I didn’t have the confidence to pursue self-employment as a serious career – it wasn’t even on the radar.

As a girl, growing up in small-town England in the 80’s and 90’s, expectations for me were low. The fact remained, most of the girls in our town would leave school and have babies (often they were pregnant before leaving school) and maybe work part-time in a local shop. Most of the boys were being groomed to work at one of the two major employers in town – an aerosols manufacturer and a mattress manufacturer. Of the class of ’93 leaving Courtfields Community School, I think only 5 girls went on to go to University (I was one of them, but didn’t stay – long story, and one for another time!).

So when I first heard about Young Enterprise, I jumped at the chance to volunteer.

Young Enterprise is a fantastic scheme that takes the expertise of professional business people into schools. It introduces the idea of running a business as an option at that crucial stage where teenagers are being expected to make decisions about their careers. It provides them with the opportunity to give enterprise a go, they even earn money and compete for recognition.

Seeing the young people empowered to grow in confidence, explore their own creativity and develop their business skills is fantastic.

Making those big career decisions is scary for young people; I don’t know about you, but as a teenager, I was crippled by the indecision of what jumper to wear so I wouldn’t get noticed or bullied, and by whether or not I should talk to a boy!

Being told that I had to decide what I’d do for the rest of my life by teachers and careers advisors just did not compute.

I remember having a panic attack at one stage because I was scared I wouldn’t get good enough grades to go to uni and I’d be a giant failure forever!

… Did I mention, I also had (and still do) and overactive imagination!

(I was always going to end up being a writer!)

Everything is massive and daunting when your hormones are raging all around your body (hence the poetry therapy!).

Speaking at my first Young Enterprise event last year, and being a judge at their trade fairs, I can’t help but wonder what would have happened if I’d have had such an amazing opportunity and that kind of support as a teenager.

For too long, ‘self-employment’ and ‘business’ have been veiled in a smokescreen of suits! I’m a firm believer that enterprise should be accessible, and it should be encouraged and supported.

So, if I could offer one piece of advice to my 16-year-old self, it would be: 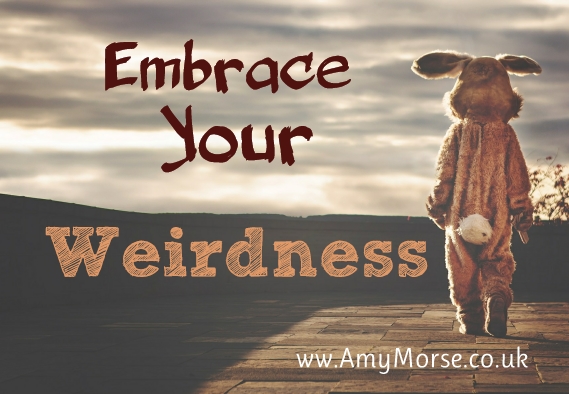 Embrace your weirdness, it’s what will make you interesting and successful in the future.

I asked my network of self-employed friends and business buddies this question, and in part 2 I’ll share with you what they said…

If you could offer 1 piece of advice to your 16-year-old self, what would it be?

Tell me in the comments, and I may even feature you in part two!