Every month, I collect the stories that fascinate, inspire, educate and are generally worth keeping for reference on a Flipboard monthly magazine.

I try to keep it positive, but sometimes, some stories stand out.

I found this article on Reuters about the world’s biggest plastic polluters and their ‘solution’ to waste disposal.

A Sea of Plastic

We’re drowning in a sea of plastic waste – less than 10% of plastic produced is recycled.

To combat the problem – but mostly to save money – deals have been struck between the biggest plastic polluters and cement factories to burn plastic for fuel.

The article is HERE

Big brands, that supply FMCGs (Fast Moving Consumer Goods) to buyers around the globe, are responsible for the majority of single use plastic waste created.

They are keen to pass the buck onto consumers and absolve their responsibility as industrial scale plastic polluters, by emphasising individual action.

What To Do With The Waste We Have?

While we can all do our part to reduce the amount of single use plastic waste we create as individuals, the fact is, there are already mountains of this stuff out there in the environment.

Although the article uses Indonesia as its case study, we don’t get away scot-free in the developed world.

Plastic pollution is not something other people in other parts of the world are responsible for. We are ALL responsible, every human on the planet!

In the West, we are by far and away the biggest consumers of ‘stuff’. ‘Stuff’ that is made cheaply in developing countries and shipped around the world, leaving them with the waste and pollution to deal with – because of our lust for stuff.

Everywhere you go, here in the UK, there is rubbish. Despite us having waste disposal processes in place, people still throw their trash on the ground, or it’s blown around the street on bin day, or blown around or seeps into water supplies from landfill.

Much as we try to move our waste out of sight and out of mind, it’s still there. We can’t escape from it.

In a masterstroke of PR greenwashing, the ‘solution’ is to burn it as fuel.

To be pragmatic, and give these companies a small amount of credit, there is a lot of this stuff that needs to go somewhere. Burning it reduces the amount of fossil fuels that would have otherwise been burned and also reduces the mountains of waste.

It’s not ideal. These businesses are spinning it as a ‘green’ solution, but it’s anything but.

If you’ve ever stood down wind of a plastic fire you can confirm that it absolutely reeks! All it does is remove the waste from the ground and puts it in the sky instead.

The message is:  “They are only poor people in another country, they don’t matter..” – They definitely don’t matter if you are Unilever, Nestle or Coca-Cola!

Just three of the household names on the list of the world’s top ten plastic polluters. Here are the others.. 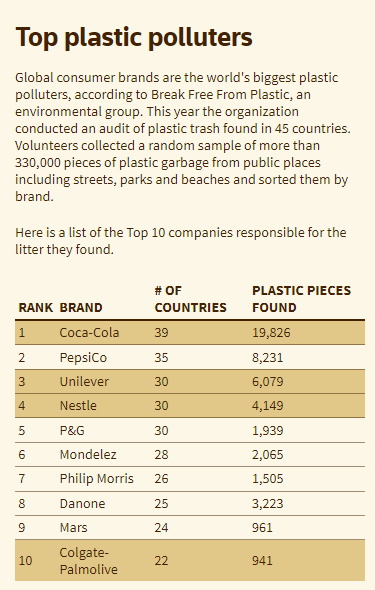 I wish I could offer some hope, some positive solutions or take on this, but in truth, it’s demoralising and dispiriting.

All we can do as individuals is our best to reduce our consumption and our waste!

These ten businesses have the power to change the world, if they chose to…